Gold prices continued in a ‘fade the rallies’ type market – moving back and forth in mini rallies and slumps between the $1,750 and $1,800 range. The safe haven continues to trade then in a narrow band, seeking a break either up or down, which would firstly require a major move in the U.S dollar.

On Wednesday, however, gold moved down sharply just before the U.S Fed meeting, where they were expected to confirm the size and timing of their tapering measures i.e they promise to slow down the speed of their money printing presses. It has since pared back those losses in early Thursday trade.

Fed Chair Jerome Powell told a press conference that the U.S central bank would scale back treasury and asset purchases by $15 billion a month, starting in November. The Fed has been buying $80 billion of Treasuries and $40 billion of Mortgage-Backed-Securities every month to help prop up liquidity in a systemically unstable financial system buckled by Covid-related lockdown measures. The FOMC said it will thus reduce Treasury purchases by $10 billion and mortgage-backed securities by $5 billion, monthly.

Powell said that the planned pace of tapering would put them on track to wrap the process up by mid-2022. However, he noted that it could be sped up or slowed down depending on the economic outlook. Additionally, the Fed made it clear that interest rates weren’t going up anytime soon on their account, reiterating that rates will be held near zero until the economy achieves ‘maximum employment’.

The interest rate in the U.S is 0.25%, and the Fed’s preferred inflation measure was 4.4% in the 12 months ending September, the highest in three decades and more than double the central bank’s target. Consumers’ expectations for prices climbed to 4.2% in the same month, the highest in records going back to 2013. This means there’s a strongly negative real interest rate environment in America of c.-4%. This helps the U.S government to pay back their mountain of debt, currently sitting at $29 Trillion, because the real value of repayments declines.

The Fed, as an arm of the government, will look favourably upon this environment, but will try to manage the stability of it. Consequently, as chief economist at Northern Trust, Carl Tannenbaum stated in a Bloomberg interview, “I would describe it as a dovish tapering.” This should keep gold anchored in its current range, until economic data surprises. 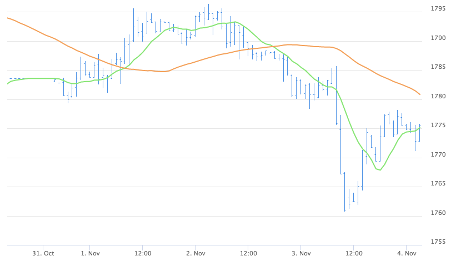