After a stellar previous week, where gold prices gained nearly $45 dollars and ended the week testing the $1,800/oz mark, prices have since moderated in the new week to the $1,770 level.

The pullback during the new week was a healthy consolidation of strong gains from the previous week, and was largely driven by higher U.S Treasury bond yields creating competition for the non-yield bearing money that is gold.

Even though the Dollar weakness continued – the DXY dollar index is down nearly half a percent in the past week – it was markets reaction to an increase in the U.S 10-year yield to above 1.6% that made gold traders take profit in institutional markets.

Almost counterintuitively, the increase in Treasury yields are positive for gold owners, because it’s a natural response by markets to factor in a shorter-than-expected Fed tapering exercise. Last week, U.S CPI data showed that inflation remained persistently high, throwing doubt over the Fed’s transitory inflation narrative and their supposed intentions to slow down their printing press.

This is why we’ve seen the Dollar currency continue to decline in the new week, and markets betting against the greenback – hence the increase in rates. “The market, as a snapshot of that, priced in increased stagflation fear,” said Marcus Garvey, head of metals strategy at Macquarie Group Ltd in a Bloomberg interview. “That inflation now will bring forward tightening, but the economy won’t handle it, and, therefore, it will be a very limited tightening cycle.”

So in the short-term, the gold price was impacted negatively, but going forward the safe haven should continue to move about these levels – remaining in a broad range between $1,700 and $1,900 around a central point of $1,800/oz. 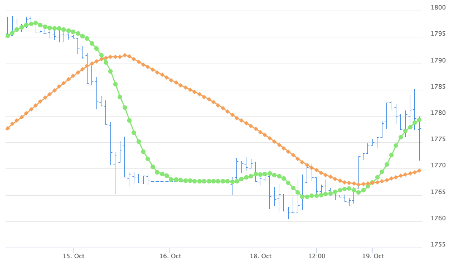